... and Learn to Eat For the Glory of God!
Skip to content

Practicing the Presence of God from Brother Lawrence, Videos

Conversion and previous employment. * Satisfaction in God’s presence. * Faith our duty. * Resignation the fruit of watchfulness. 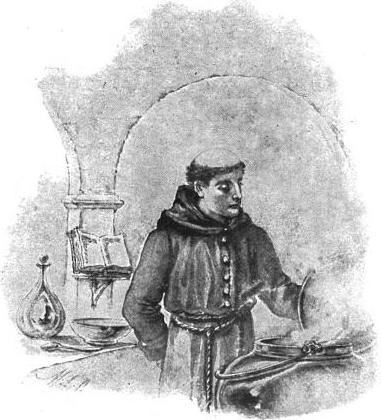 THE first time I saw Brother Lawrence was upon the 3rd of August, 1666. He told me that GOD had done him a singular favour, in his conversion at the age of eighteen.

That in the winter, seeing a tree stripped of its leaves, and considering that within a little time, the leaves would be renewed, and after that the flowers and fruit appear, he received a high view of the Providence and Power of GOD, which has never since been effaced from his soul. That this view had perfectly set him loose from the world, and kindled in him such a love for GOD, that he could not tell whether it had increased in above forty years that he had lived since.

That he had been footman to M. Fieubert, the treasurer, and that he was a great awkward fellow who broke everything.

That he had desired to be received into a monastery, thinking that he would there be made to smart for his awkwardness and the faults he should commit, and so he should sacrifice to GOD his life, with its pleasures: but that GOD had disappointed him, he having met with nothing but satisfaction in that state.

That we should establish ourselves in a sense of GOD’s Presence, by continually conversing with Him. That it was a shameful thing to quit His conversation, to think of trifles and fooleries.

That we should feed and nourish our souls with high notions of GOD; which would yield us great joy in being devoted to Him.

That we ought to quicken, i.e., to enliven, our faith. That it was lamentable we had so little; and that instead of taking faith for the rule of their conduct, men amused themselves with trivial devotions, which changed daily. That the way of Faith was the spirit of the Church, and that it was sufficient to bring us to a high degree of perfection.

That we ought to give ourselves up to GOD, with regard both to things temporal and spiritual, and seek our satisfaction only in the fulfilling His will, whether He leads us by suffering or by consolation, for all would be equal to a soul truly resigned. That there needed fidelity in those drynesses, or insensibilities and irksomeness’s in prayer, by which GOD tries our love to Him; that then was the time for us to make good and effectual acts of resignation, whereof one alone would oftentimes very much promote our spiritual advancement.

That as for the miseries and sins he heard of daily in the world, he was so far from wondering at them, that, on the contrary, he was surprised there were not more, considering the malice sinners were capable of: that for his part, he prayed for them; but knowing that GOD could remedy the mischiefs they did, when He pleased, he gave himself no farther trouble.

That to arrive at such resignation as GOD requires, we should watch attentively over all the passions which mingle as well in spiritual things as those of a grosser nature: that GOD would give light concerning those passions to those who truly desire to serve Him. That if this was my design, viz., sincerely to serve GOD, I might come to him (Bro. Lawrence) as often as I pleased, without any fear of being troublesome; but if not, that I ought no more to visit him.

WHO ARE YOU FOLLOWING?

No one, not even your leaders can lead you where they have not been with God. It is up to each of us to learn at His feet and have His Word revealed to us as we live this life…..IN HIM!

COLOSSIANS 1:9-10 -- "For this reason, since the day we heard about you, we have not stopped praying for you. We continually ask God to fill you with the knowledge of his will through all the wisdom and understanding that the Spirit gives, so that you may live a life worthy of the Lord and please him in every way: bearing fruit in every good work, growing in the knowledge of God"