... and Learn to Eat For the Glory of God!
Skip to content

Practicing The Presence of God

Writes of himself as of a third person and encourages his correspondent to press on to fuller practicing of the Presence of God.

I Have taken this opportunity to communicate to you the sentiments of one of our society concerning the admirable effects and continual assistances which he receives from the presence of GOD. Let you and me both profit by them.

You must know, his continual care has been, for above forty years past that he has spent in religion, to be always with GOD; and to do nothing, say nothing, and think nothing which may

displease Him; and this without any other view than purely for the love of Him, and because He deserves infinitely more. 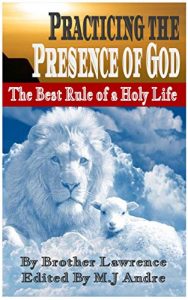 He is now so accustomed to that Divine presence, that he receives from it continual succors upon all occasions. For about thirty years, his soul has been filled with joys so continually, and sometimes so great, that he is forced to use means to moderate them, and to hinder their appearance outwardly.

If sometimes he is a little too much absent from that Divine presence, GOD presently makes Himself to be felt in his soul to recall him; which often happens when he is most engaged in his outward business: he answers with exact fidelity to these inward drawings, either by an elevation of his heart towards GOD, or by a meek and fond regard to Him, or by such words as love forms upon these occasions; as for instance, My GOD, here I am all devoted to Thee: LORD, make me according to Thy heart. And then it seems to him (as in effect he feels it) that this GOD of love, satisfied with such few words, reposes again, and rests in the depth and center of his soul. The experience of these things gives him such an assurance that GOD is always in the depth or bottom of his soul, and renders him incapable of doubting it, upon any account whatever.

Judge by this what content and satisfaction he enjoys, while he continually finds in himself so great a treasure: he is no longer in an anxious search after it, but has it open before him, and may take what he pleases of it.

He complains much of our blindness; and cries often that we are to be pitied by those who content ourselves with so little. GOD, saith he, has infinite treasure to bestow, and we take up with a little sensible devotion which passes in a moment. Blind as we are, we hinder GOD and stop the current of His graces. But when He finds a soul penetrated with a lively faith, He pours into it His graces and favors plentifully; there they flow like a torrent, which, after being forcibly stopped against its ordinary course, when it has found a passage, spreads itself with impetuosity and abundance.

Yes, we often stop this torrent, by the little value we set upon it. But let us stop it no more: let us enter into ourselves and break down the bank which hinders it. Let us make way for grace; let us redeem the lost time, for perhaps we have but little left; death follows us close, let us be well prepared for it; for we die but once, and a miscarriage there is irretrievable.

I say again, let us enter into ourselves. The time presses: there is no room for delay; our souls are at stake. I believe you have taken such effectual measures, that you will not be surprised. I commend you for it, it is the one thing necessary: we must, nevertheless, always work at it, because not to advance, in the spiritual life, is to go back. But those who have the gale of the HOLY SPIRIT go forward even in sleep. If the vessel of our soul is still tossed with winds and storms, let us awake the LORD, who reposes in it, and He will quickly calm the sea.

I have taken the liberty to impart to you these good sentiments, that you may compare them with your own: they will serve again to kindle and inflame them, if by misfortune (which GOD forbid, for it would be indeed a great misfortune) they should be, though never so little, cooled. Let us then both recall our first fervors. Let us profit by the example and the sentiments of this brother, who is little known of the world, but known of GOD, and extremely caressed by Him. I will pray for you; do you pray instantly for me, who am yours in our LORD.

WHO ARE YOU FOLLOWING?

No one, not even your leaders can lead you where they have not been with God. It is up to each of us to learn at His feet and have His Word revealed to us as we live this life…..IN HIM!

COLOSSIANS 1:9-10 -- "For this reason, since the day we heard about you, we have not stopped praying for you. We continually ask God to fill you with the knowledge of his will through all the wisdom and understanding that the Spirit gives, so that you may live a life worthy of the Lord and please him in every way: bearing fruit in every good work, growing in the knowledge of God"